This episode was terrible and I couldn’t bring myself to write a full post about it so here is the five good and five bad things about it. 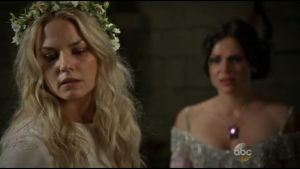 The first scene they had together in Stroybrooke with Henry (Jared Gilmore) was great. Mostly because of how it set up the season’s action and the absurd levels of sexual tension. Emma taunts Regina about what happened in Camelot, but Regina points out it must be bad if she took the memories from everyone. Emma warns Regina that something is coming to Stroybrooke that only the savior can stop. Regina says she can be the savior now but Emma isn’t buying it.

In Camelot six weeks ago, Regina is covering for Emma and telling everyone she is the savior so Emma doesn’t have to use magic. Regina is worried that she is going to go dark. I hope the shows plays it up more of Regina using the dagger to control Emma by accident because it adds a really great new level to their relationship and power dynamic.

Also, Regina says she will release Merlin from the tree in Camelot so Emma never has to use dark magic. Emma agrees to save Robin in Camelot and pay the price herself despite Hallucination Rumple (Robert Carlyle) saying it is Regina’s price.

Some of the scenes were terrible, but the show contrasting Hook and Belle (Emilie de Ravin) was clever in the show’s canon. Hook thinking Emma being the Dark One was a curse that could be broken with true love’s kiss was horrible because clearly it is not a curse you idiot. But Belle trying to explain to Hook that loving the Dark One is harder than hating them was good. Also, showing them together while Rumple was talking about love was a good bit.

Henry gets a love interest

While in Camelot, Henry meets a girl named Violet (Olivia Steele-Falconer) at the ball Arthur held for them. He meets her again in almost the exact same way in Storybrooke. The curse Emma cast to bring everyone back to Storybrooke also brought a bunch of Camelot folks. I’m glad Henry has gotten a love interest and the show has acknowledged the fact he isn’t the useless kid that he used to be. Also, did Violet remind anyone else of Lily? Aw, the Swan side of Swan-Mills having similar first loves.

The return of Hallucination Rumple 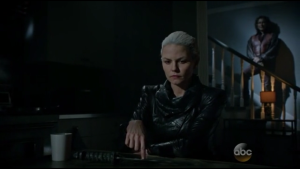 Emma’s reaction to seeing Hallucination Rumple was what sold me on the idea. She seemed to think she was done with his guidance because she embraced the darkness, which makes me think there is a larger reason for her turning dark. This might be me trying to add too much meaning to this mess, but I really hope I’m not because it would be good and interesting. He also lead Emma to the sword in the stone in the basement of her stolen house. He tells her she can complete the sword and snuff out the light forever.

Bo Peep being a warlord might be the last thing that pissed me off as much as this dance scene with Regina and Snowing. Regina doesn’t know how to dance? You mean Regina, who was raised by Cora who was dead set on having her daughter marry up so she could become a queen did not teach her to dance? I get that the show as trying to do something cute and vulnerable with Regina, but when it goes so much against her backstory it just comes off terribly.

Why with the kissing?

There was so much kissing in this episode. Emma and Hook didn’t even kiss in the 4B finale but they kissed twice in this episode. One was Hook idiotically trying to break the non-existent Dark One curse, but the other was after Emma saved Robin in Camelot because Robin almost dying made her think of how much she likes Hook? Because after such a dramatic scene with Regina the show has to remind us they are straight by having both of them kiss their dude love interests? Regina and Robin made a bit more scene. He did almost die in Camelot and Storybrooke, but Regina’s interaction with Emma about saving Robin was way more dramatic and heartfelt than her reaction to Robin almost dying.

That is not how Greek Mythology works

Every so often this show poaches from Greek mythology like it is a normal fantasy show and not a show about fairy tales Disney owns the rights to. It always turns out bad. This time the show had a harpy — though it called it a fury — attack Robin and try to pull him into the underworld. So yeah a harpy, not a fury, which causes madness. The terribly CGI’ed fury takes Robin to Lake Didn’t Exist Until Season Three, which doubles as the River Styx, I guess. Charon then floats out, but Regina, Snowing and a few dwarfs that are hanging around like they are main characters again share the dementor’s kiss from its and it goes away? I don’t even know. That is not how Greek mythology works. 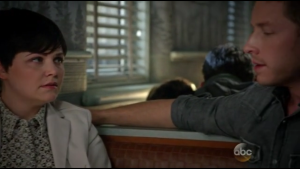 When did Snow and Charming start going by Mary Margret and David again? Everyone was using fake names in Camelot, which I understood for Regina who didn’t want everyone to know she was the former Evil Queen Regina right out of the gate. But, it has been established that Camelot is a realm of the Enchanted Forest so wouldn’t Snow and Charming have more authority going by Snow and Charming? 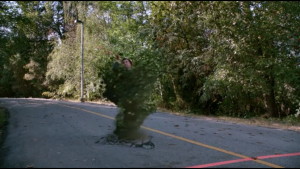 The episode started with the dwarfs voting someone to cross the town line to see what happens because they don’t want to deal with Storybrooke and all its dangers without a savior. Dopey crosses and turns into a tree. Regina says, “that’s new.” Also, Merlin is a tree in Camelot. None of this was explained. Hopefully this is something for a later episode to reveal because if not what?