1. This episode was great 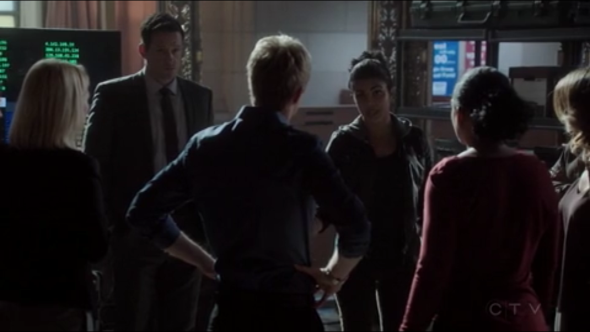 I just wanted to get that out of the way. I really liked this episode. It was filled with actual good twists and gave everyone something to do. Sure, the pre-bombing story line had a little too much Natalie, who isn’t really working for me because they made her too bitchy for too long for us to like her now. But, it also had a lot of good stuff with Simon, who is one of the most complex characters on the show, and gave us some much needed character development for Nimah.

The post-bombing story line was great as all the main characters worked together to spy on the rest of their class. It was great to see everyone together and not be so god damn concerned about who is banging who.

2. Yay for the return of Alex and Shelby.

As I’ve said before but half this show is about who is dating who but the actually interesting relationships and dynamics are the partnerships, platonic friendships and sexual tension filled friendships. My favorite of all of those: Alex and Shelby. Since they have both been held by the FBI in different places for while, we haven’t had a lot of them together. But, Shelby apologizes for doubting Alex earlier and they make up. This episode wrecked nearly every relationship it has created, which is going to make for interesting stories coming up. Despite Alex reluctantly agreeing to spy on the other members of her team with Shaw and O’Connor, she still tries to protect Shelby but it all blows up in Alex’s face and everyone, especially Shelby, is feeling betrayed by her. 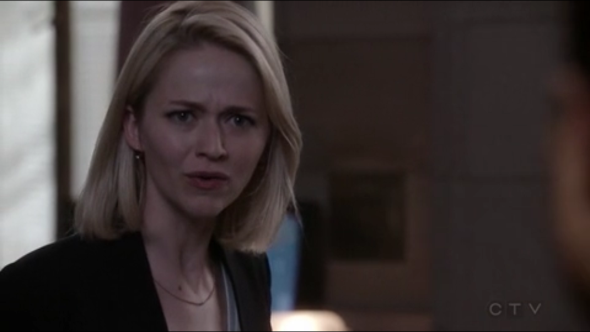 Post-bombing she makes up with Alex, only to feel betrayed by her later when she and everyone else realizes Alex, Shaw and O’Connor spied on them. Also, her affair with Super Dull Blonde Dad is now on the record because she was calling him to break it off. Oh, and Super Dull Blonde Guy told his mom about it.

Pre-bombing she is getting doubted for not being a strong enough fighter and then she thinks Super Dull Blonde Guy is about to break up with her. And then he starts telling her her sister might be Catfishing her for money.  As she points out, her sister is the only family she has left and that is a mean thing to say. But, it turns out to be true. This episode was all about emotions and wrecking everyone.

Super Dull Blonde Guy kept saying he was trying to protect people this episode, but he was a real asshole in how he went about it. To protect Shelby from the suspicion from his dad that she is giving money to a terrorist organization, he stole files off her computer to try and prove her sister was real. He then proves her sister is actually using her, in front of her! He also protected his mom’s political career by telling her about Shelby sleeping with his dad, after Shelby had already broken it off. I’m not saying any of this was the wrong thing to do, but there are nicer ways. Of course, doing the right thing even if it isn’t the nicest was the theme of this episode. But, Shelby didn’t have to be in the room for that call.

5. Simon has been having a rough go of things

Simon needs a break, which seems unlikely since he got kidnapped at the end of this episode. Pre-bombing Simon is getting shunned by the class because of turning in the serial killer obsessed speaker from last week. Nimah then digs up his about how he used to lure women to get them killed, which he didn’t know was happening, while he was serving in the IDF and spills it in front of the entire class. Only Ryan, Alex and Raina, sort of, stand up for him. He then gets kicked out of Quantico because Shaw found out about him attacking Ryan earlier.

Post-bombing we find out he isn’t actually the terrorist. Well, he isn’t the terrorist but he might be a terror. He made flawed bombing devices so he could plant bombs under a mosque and a synagogue near Grand Central, stop them from going off so he could be a hero and get everyone to talk and bond together. But someone stole his idea, fixed the flaws and blew up Grand Central. Everyone turns against him until he points out that Alex has caused them all a lot of problems. Shelby and even Nimah agree with him when everything hits the fan and everyone is left alone.

Simon goes home to get his affairs in order before O’Connor has him arrested the next day. Alex stops by and pleads with him to help her fix everything and work with her like they used to at Quantico. But, he says there is no going back. And then he is kidnapped.