I had mixed feelings going into this episode. I was nearly blinded with excitement because Delia is moving into Nonnatus and I figured Patsy would be heavily involved in the typhoid story line. But, I kept hearing that it was going to be Sister Winifred focused. I don’t dislike Sister Winifred, I enjoy her because she is such an asshole and I kind of hate her. And this episode did not shy away from that and I thoroughly enjoyed it.

The episode starts with Patsy (Emerald Fennell) delivering a baby in a close-knit housing complex that seemed to be populate mostly by one family.

Over at Nonnatus, Tom (Jack Ashton) runs into Barbara (Charlotte Richtie) outside and asks her to get dinner with him because he won a meal in a raffle for an Indian restaurant in the West End. Barbara agrees and is excited about the idea. Well, mostly about the food, it doesn’t seem to click with her that it might be a date until later.

Patsy gets home, throws her bike in the garage, nearly runs inside and upstairs to find Delia (Kate Lamb) being shown her room by Sister Mary Cynthia (Bryony Hannah). Delia says she has a lot of unpacking to do and Patsy is more than willing to help. They set up her room and Patsy puts some flowers in a vase saying she has waited a long time to sit and look at them with Delia.

Patsy says it took longer than she thought and Delia says they are back together and under the same roof, just like they wanted to be. She then jokes that it is also with three other nurses and a bunch of nuns.

Speaking of nuns, Sister Winifred (Victoria Yeates) is teaching first aid to an elementary school class. She gets talking with the teacher, Dorothy, about how she used to be a teacher and misses it sometimes. Then Dorothy collapses and Sister Winifred realizes she is pregnant.

She goes with her to Dr. Turner’s (Stephan McGann) office. After he leaves, Dorothy tells Sister Winifred she isn’t married but her boyfriend is. Sister Winifred is acting a little judgmental. 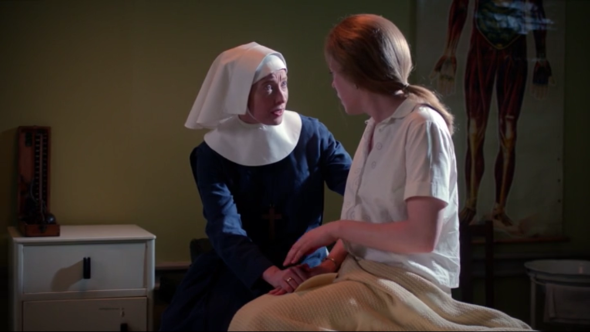 Patsy goes back to check on the family from the beginning. The mom, Jeanette, is sick and her grandma has no idea what is happening. Patsy is slowing piecing it together and looking more and more scared. They get Jeanette to the hospital and Patsy and Dr. Turner are pretty sure it is typhoid but they don’t want to say anything yet, as to not cause a panic. Patsy agrees knowing how bad typhoid can be because it killed her mother and sister in the prison camp she was in during the war.

Patsy gets home to explain to Trixie (Helen George), Barbara, Delia and Shelagh (Laura Main). Delia says the treatment for typhoid isn’t want it used to be and tries to take Patsy’s hand. Patsy snaps at her and pulls away. Barbara and Shelagh look confused. Trixie tries to defuse the situation but Delia excuses herself and goes upstairs.

Trixie then tells Patsy she understands that she has had a hard day but that was rude and she needs to go apologize to “their new housemate.” Have you worked this out yet, Trixie? I feel like you’ve worked this out.

During all of that, Dorothy tells her boyfriend, another teacher at her school, and he says there are ways to get rid of it if they had enough money, which she doesn’t and he doesn’t offer to give her any. She then gets kicked out of her boarding house. She calls the boyfriend for help and he ignores her so she goes to Nonnatus for help.

Sister Winifred isn’t really that nice about the whole thing and barely speaks to her. Sister Julienne (Jenny Agutter) is able to get her a room at the Women’s Hostel. Then the nuns go to pray and Dorothy heads to the hostel herself and sits in her room alone. I love the contrast of this story line and Patsy and the typhoid family. Dorothy spends most of her story line alone, without Sister Winifred, and Patsy seems to constantly be with family to help them. Part of that is because she gets taken off midwifery and the district roster since she’s been exposed but it is also because she isn’t a heartless bitch, like Sister Winifred. 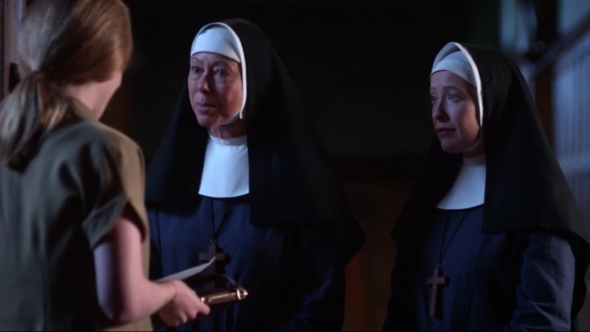 Back at Nonnatus, Patsy goes into Delia’s room, starts to cry and apologizes. Delia apologizes for bringing up her family and the camp since she knows she doesn’t like to talk about it but she knew she would be thinking about it. She was and tells Delia she wanted to let her comfort her but didn’t know how with everyone else there. Delia offers to leave but Patsy says she doesn’t want her to and they agree they will figure something out.

Dr. Turner and Patsy go back to the typhoid complex and explain to everyone how to be safer. One lady gets mad that hand washing if the advice they give. She also starts acting really racist against Jeanette’s Chinese husband, Benny. Sister Mary Cynthia came to help out and finds a elderly member of the family has died. Patsy and Dr. Turner think it was from typhoid and bring in everyone for blood tests.

Over in the romantic subplot, Barbara has told Nurse Crane (Linda Bassett) about her dinner with Tom. Nurse Crane says it sounds like a date and Barbara seems to have worked that out too, so she hasn’t told Trixie yet. Nurse Crane helps Barbara get ready for it. Patsy walks in and Barbara tells her not to tell Trixie. Nurse Crane pretty much repeats Patsy’s line about not lying all the time from last episode. The miscommunication theme has really carried over from last season. But, Nurse Crane did figure out Trixie is going to AA and told her she is proud of her.

Tom has a few conversations about the date with Fred (Cliff Parisi). It seems to have not even crossed Tom’s mind that maybe going out with one of his ex-fiance’s friends would upset her. Barbara ends up not getting a chance to tell Trixie and she finds out by seeing them holding hands as they get home from their date.

The blood tests come back and Dr. Turner and Patsy go to tell Jeanette’s grandmother that she is a typhoid carrier. She gets rather freaked out by this thinking she got her granddaughter sick and killed a family member. Patsy stays and tries to explain to her that is it easy to manage and she doesn’t need to be so concerned. Patsy struggles to get through to her and she just keeps washing her hands until they bleed.

Dorothy’s boyfriend drops off a letter and some money to her old address, which results in her old landlady telling the school she is pregnant and she is fired. She then tries to give herself a coat hanger abortion, which doesn’t work and she collapses at the bus spot.

Sgt. Knoakes (Ben Chaplan) comes to Nonnatus to tell Sister Julienne and Sister Winifred. Dorothy is in the hospital and he is trying to track down the abortion doctor or arrest Dorothy if she did it to herself. The abortion didn’t work but she did miscarry and will not be able to get pregnant again. Sister Winifred has a breakdown in the chapel as she realizes she was a heartless bitch and wasn’t there for Dorothy when she needed her. Sister Julienne tells her to be for her now. 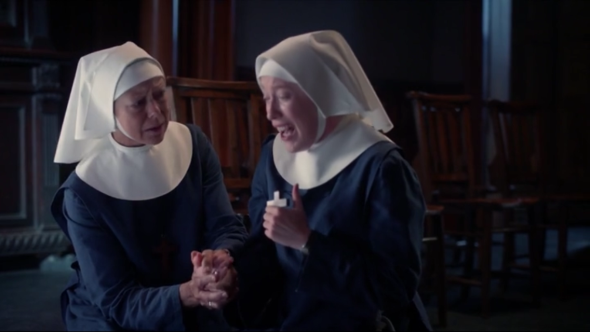 Sister Winifred goes with Sgt. Knoakes to the hospital, apologizes to Dorothy, who doesn’t admit to giving herself an abortion but implies it. Sister Winifred pleads with Sgt. Knoakes to not arrest her. He says he can’t do anything, but it is unlikely his superiors will press charges because they are after abortion doctors. Dorothy doesn’t get arrest but she does leave Poplar. 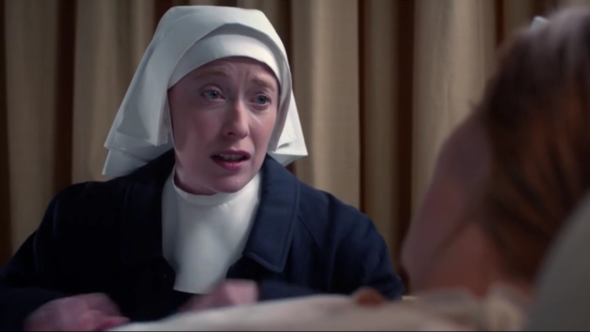 Patsy is able to convince Jeanette’s grandmother to agree to be re-housed in a new flat with running water that would be easier to clean. She agrees and most of her family and Jeanette, who fully recovered, are there celebrating.

Overall, this was a pretty good episode. It was a little unbalance because Dorothy’s story line didn’t have much of our characters but there was a lot of little character moments throughout like Violet makes really good jam and Sister Monica Joan keeps eating all of it and then claiming it has disappeared. So, it evened out.