So, I have not been posting about Once Upon A Time because I have not been watching season 5B. I was going to but then I heard it destroyed Meg from Hercules’ character. And she is such an important part of my childhood, I didn’t want to watch that. But, I have been reading reviews about this half season and know what is happening. I decided to watch this episode because I knew Mulan (Jamie Chung) and Ruby (Meghan Ory) were going to be back and A&E have promised a gay story line sometime this season. It didn’t go how I thought it would but shit there was a lady-on-lady kiss on effing Once Upon A Time?! 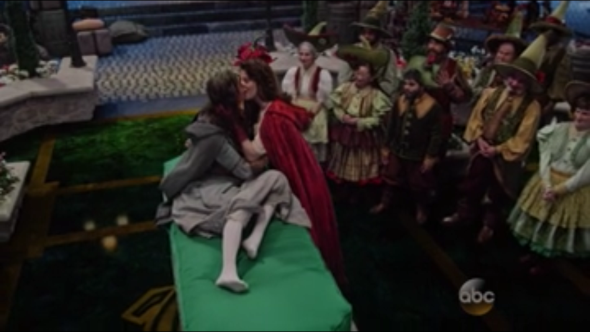 I would be more excited about this episode and this show now having a non-straight relationship and three ladies who like ladies but I doubt Mulan, Ruby or Dorothy (Teri Reeves) will appear again this season and if they do the show will probably promote it as another special guest star episode, which is not a good way to feature your LGBTQ representation.

So, going into this episode I knew Ruby fell from the sky at the end of last episode. The hero gang, which has been in the Underworld for a while, took her to the Underworld version of Mary Margret’s loft. They don’t know how she got there. When they flashback and I had to laugh at the time card. 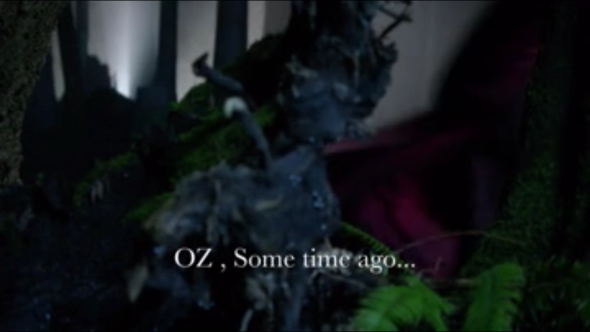 Good to know this show hasn’t changed too much. Mulan and Ruby are chasing werewolf scent through Oz. They exited “The Bear King” to find Ruby’s pack. They run into Toto and then into Dorothy. I didn’t know she had been recast. She was played by Matreya Scarrwener the last time I saw Dorothy. She was great on the Canadian show Strange Empire but she is significantly younger than Meghan Ory, so I understand the recast. 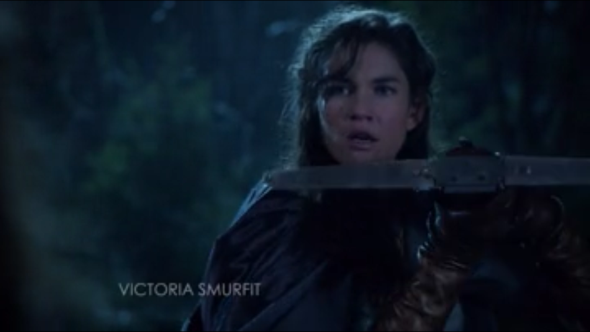 Zelena (Rebecca Mader) and Hades (Greg Germann) are a thing now. There was something about her wanting to get home to her daughter and Dorothy being her greatest enemy. Hades was seeming a bit rapey and Zelena was acting a little out of character, which fits with what I have been reading. 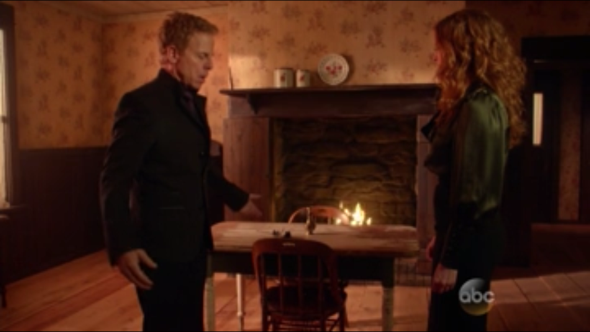 Also Belle (Emilie de Ravin) is mad at Rumple (Robert Carylye) for him signing her child over to the god of the Underworld. And Cruella (Victoria Smuft) is there chewing the scenery and taking out the magical British phone boxes that let people communicate with their loved ones on Earth. Charming (Josh Dallas) sees that and flips out that he can’t call his son, who he abandoned to chase his daughter’s boyfriend who had just tried to murder her and their entire town into the Underworld.

Back in Oz whenever, Zelena has kidnapped Toto. Zelena tells Dorothy she can give her ruby slippers to Zelena or Toto dies. Ruby and Mulan say they will help her with a sleeping curse to knock out Zelena. Mulan stays behind to brew it as Ruby and Dorothy go off to find more ingredients. They have a lot of flirty moments, which confused the hell out of me at first because “The Bear King” really made it seem like Mulan and Ruby had gone off to be gay with each other, but I guess I thought two queer ladies being just friends was above this show. I’m not going to apologizes because you earned that assumption, OUAT.

Anyway, Zelena sends a tornado at them. Ruby turns into a wolf, has Dorothy ride her and they get safely back to Mulan.

Back in Underworld Storybrooke, Zelena tells Regina (Lana Parillia) she has put Dorothy under a sleeping curse, which only true love’s kiss can break. They all flip out for a bit. Ruby thinks the only person who can break it is Auntie M. The rest of Dorothy’s family tried to have her committed to back in Kansas, which she told Ruby in a flashback. Ruby also mentioned her boyfriend in a flashback, so did the show subtly have a commitment to Ruby’s bisexuality? I would be really impressed if I had any hope this would last beyond this episode. 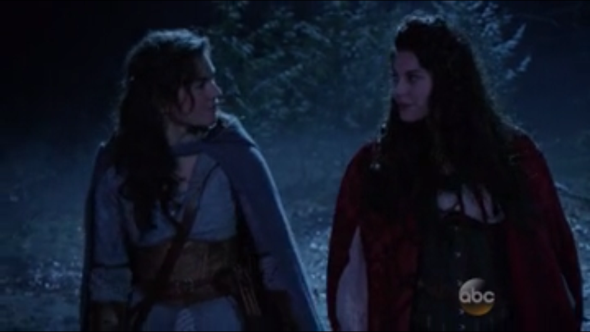 In the show’s only funny, witty moment, the Blind Witch (Emma Caufield, what are you doing here? You are too good for this show) tells them where Auntie M is and it ends up being at Granny’s Underworld rival that Auntie M owns. OK, that was a good joke.

Unfortunately, Hades is there and melts Auntie M with water from the River of…Lost Souls? I don’t know what it is called. It’s the River Stix. It was the River of Lost Souls in the Hercules movie, I think.

Anyway back in Oz whenever, Mulan asks Ruby why she is acting weird. Ruby tells her it is because she has been searching for a place where she belongs and she thinks Dorothy might be the answer. Mulan gets all smiley and tells her she has to tell her before it is too late and not make the same mistake she did. Damn, can Aurora come back and realize she is in love with Mulan? 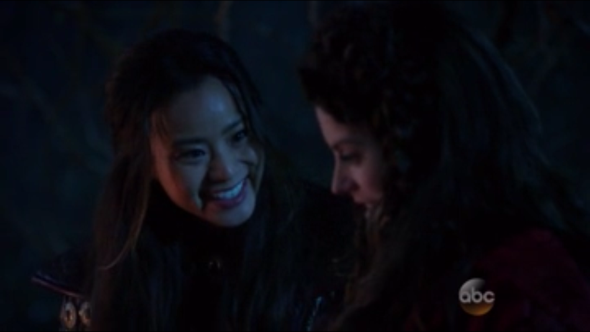 Through some nonsense about slippers, tombstones and Hook (Colin O’Donoghue) Charming convinces Snow she should go with Ruby to Oz and then to Storybrooke to take care of the child they abandoned. So, Snow and Ruby poof to Oz. They are met with a bunch of Wizard of Oz characters and Mulan. She is happy to see Ruby and says she kept Dorothy safe for her, saying she has experience in this kind of thing. Snow gives Ruby some words of encourage and then she walks up to Dorothy and kisses her, on the lips. 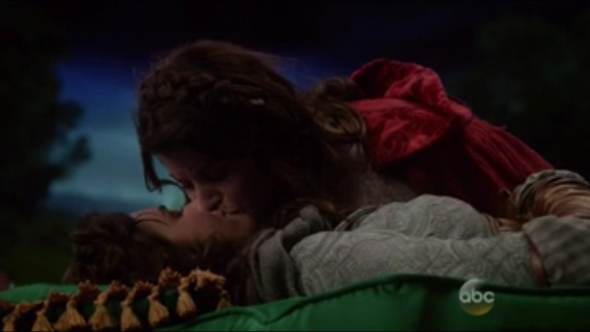 While watching I was fully prepared to find examples of when this thing has happened in other shows because I thought this would be a cheek or forehead kiss of some kind. But, nope! 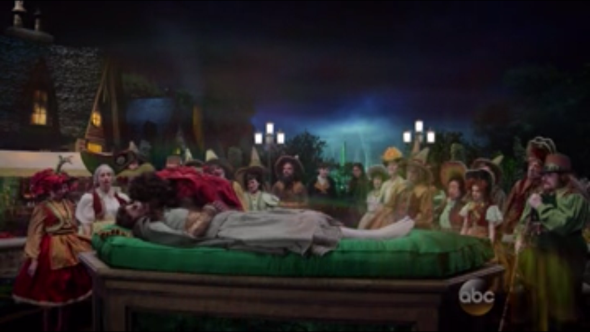 And then it kept going! 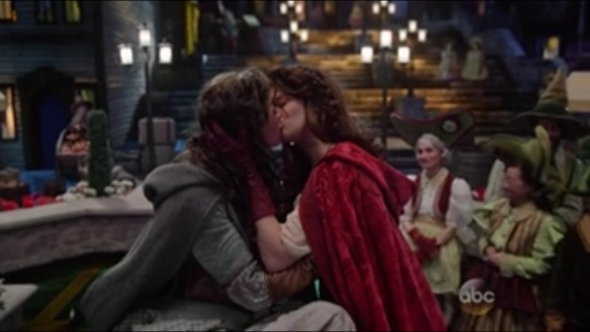 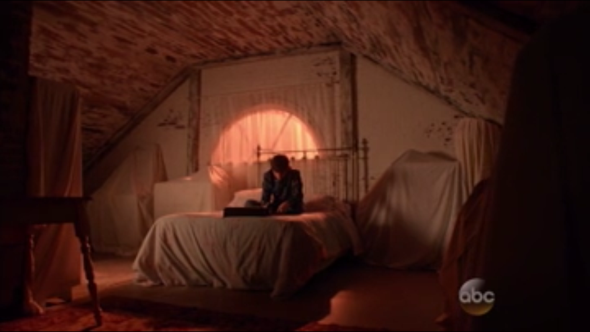 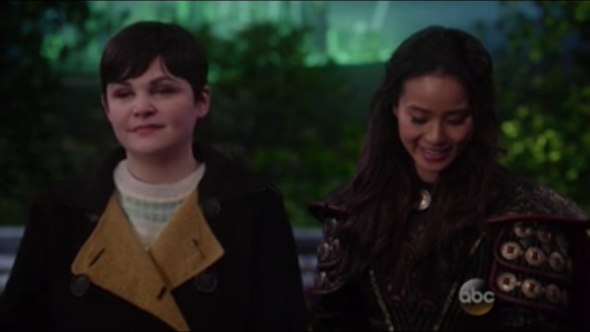 …if I had any hope of this continuing but we will not see any more for probably another half season, which is a shitty way to go about this, OUAT. How can this show have a queer kiss but still be queerbaiting?

Oh and the episode ends with Belle pricking herself with a sleeping curse to delay her pregnancy to give Rumple time to find out how to break the contract. Great way to remove Belle from her own story line there, show.

I’m probably not going to watch this show for a while again. I mean, Call The Midwife is also airing on Sundays at 8 p.m. And though there has not been a lady-on-lady kiss yet Call The Midwife handles its lesbian characters so much better.

Also, I’m a little annoyed that the show didn’t put Ruby and Mulan together. I know Dorothy has been in a few 5B episode, but I am not committed to her character like I am with Ruby, who has been around since the pilot episode, and Mulan, who has been around since season two. I would let that slide because Mulan mentioned Aurora multiple times but this effing show isn’t going to bring her and her Sleeping Warrior cock-block baby back to have her leave Phillip for Mulan, so yeah I’m not wasting my Sunday evenings on this show anymore.