I really don’t know how I feel about American Horror Story: Roanoke. For a series that I truly think peaked in its second season, I sometimes wonder why I even come back every season. It is always with differing degrees of excitement. I was pretty excited for season three and it was super fun nonsense. Season four was OK. I gave up after about five episodes of season five. But, I have decided to stick with season six. Though I am not sure if it is out of enjoyment or curiosity.

I didn’t start watching this season right when it started airing, which is something I haven’t done since season one. I had given up after the bit of Hotel I had watched. But, from being told it had a strange new format and that Sarah Paulson was looking incredibly attractive, I decided I would tune in.

And for the most part, I think I like AHS: Roanoke. It might get a bit of slack because it has basically been two shows within one season. The first was the fake documentary series. Now, I love a bad, low-budget true life haunting shows. So, I was a big fan of the first part of this season, because it had a hint of that and everything I like about this show; creepiest, actual scares and, the main draw for this show anymore, its cast. Sarah Paulson, Angela Bassett, Kathy Bates, Lily Rabe, Francis Conroy, minimalist Lady Gaga, eventually Evan Peters and Cuba Gooding Jr. making the jump over from American Crime Story.

In the earlier episodes, I was getting annoyed that nobody in the show seemed to know about the lost Roanoke colony, even when people were yelling Croatoan at each other. Did none of them take American history ever? But, I guess I shouldn’t be so annoyed given the amount of times characters on Designated Survivor have had to explain what a designated survivor is.

I do have to admit, I didn’t like “Chapter 6”, the first episode after My Roanoke Nightmare ended and Return to Roanoke: Three Nights in Hell began. Of all the possible actors to seeming be the lead of the second half of the season, why make it Cheyenne Jackson? He is all right, but within my view of this show he is just one of the indistinguishable white guys from season five. I know she is probably busy with Scream Queens but how great would it have been if that asshole producer was played by Emma Roberts? Or hell even Taissa Farmiga, just someone I know and like. 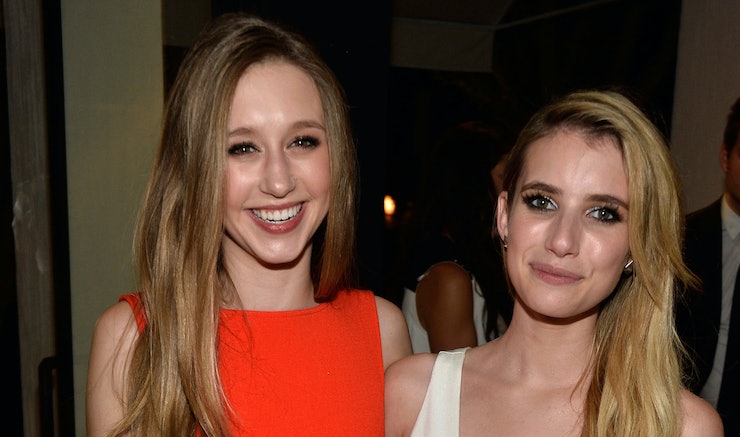 There was one thing I really, really liked about the big twist of season six; the show finally put Sarah Paulson and Evan Peters together in a romantic way (and more than just at the very end like in season four). Though Sarah Paulson’s incredibly bad British accent was distracting me, she and Evan Peters were great. But because this show always has some problems, it kills Rory (Evan Peters’ character) way too quickly. It also killed his My Roanoke Nightmare character way too quickly.

The show seemed to course correct a lot of the problems I had with “Chapter 6” in “Chapter 7”. It killed Cheyenne Jackson very quickly and Sarah Paulson toned down the accent and started sounding less like Mary Poppins and more like an actual British woman.

“Chapter 7” did suffer a bit because we already saw so many of the characters before just played by different people, and those people mostly being the actors who have been watching since 2011. It mostly made me wish the show had waited and had Francis Conroy playing the real Mama Polk and Lady Gaga playing the real Witch of the Woods. And I really thought the episode was building up for the real butcher to be someone we knew (Jessica Lange would have been an amazing surprise) but then she ended up being an actress I have never seen before.

Story wise, I have really been liking this season. It has had a few missteps but for the most part it is OK. I think I might start posting about it each week because hey it might not have the best story, Evan Peters and Kathy Bates might be dead but Sarah Paulson, Angela Bassett, Lily Rabe and Cuba Gooding Jr. are still running around. And that really is why I keep coming back.