This season of Once Upon A Time has gone down hill fast and recently there has just not been enough to keep me all that interested. Even the SwanQueen heavy episode last week left me slightly annoyed and bored. This week was worse, so here are two good and five bad things about “The Bear and the Bow”

Ignoring all the rape baby horribleness, I liked the scene between Zelena and Emma because she pointed out some interesting points. 1) Emma is sneaking around and hiding everything she is doing from Regina. 2) Emma is afraid of being alone. That was a perfect piece of dialogue for this show. Despite everything that had happened, Emma is still trying to get Henry, Regina and her parents to forgive her. She seems to have given up on Hook since he will not except her for who she is now.

Henry agreed to help Regina and Snowing communicate with Merlin because he also believes his mom is still there behind all the darkest. 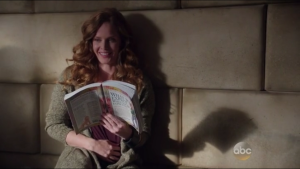 Mostly I dislike pregnancy story lines but make them mythical or the result of a rape and I fucking hate them. So that is my thought on every scene Zelena is in. If this was a different and darker show I might be more OK with this because it is super dark. But this is a “family show” that will not make any of it’s super queer seeming characters actually be queer.

Are we making Rumple Storybrooke’s greatest hero? Please no. If we are going to make a formerly evil character a hero the obvious choice is clearly Regina. That is what all of last season was about. But hell, Belle was more heroic in this episode than Rumple was. But of  course we can’t have anything positive or feminist happen with Belle. Go back to your lying, manipulative, abusive husband, Honey.

Holy music swells this episode. Between the Rumbelle cuteness and the overt Scottish-ness the soundtrack was a little overly excited this episode.

With Rumple’s backstory and Merlin’s introduction, the show spent a lot of time telling us shit we already know. And not just know but like have seen before.

Timelines? Who cares about timelines? 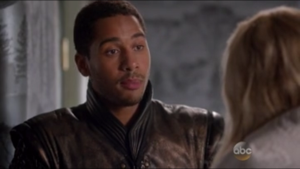 I actually laughed at this. Emma just asks about the show’s timeline fail about how Merlin was in a tree in Camelot and an usher at a movie theater in Minnesota at the same time. And Merlin just shrugged it off like, “IDK. Don’t question it.” Good continuity, show.

This plot with the Snow Queen (Elizabeth Mitchell) has actually been pretty good and her curse actually sounds interesting and I am interested in seeing it because hopefully it will include characters I actually care about. But in the meantime, we have to sit through more back story we didn’t really need, more of Rumple (Robert Carlyle) and Belle’s (Emilie de Ravin) relationship becoming slightly abusive and more fricking rock trolls.

Really only a few important things happened in this episode, but probably the most important was this:

Emma (Jennifer Morrison) shows the video of her and the Snow Queen to all the main characters that have not gone missing. Everyone is trying to figure out how she got to the regular world. Regina (Lana Parilla) is concerned with what she wanted with Emma. Charming (Josh Dallas) says they have been looking but can’t find her anywhere. Then, Henry (Jared Gilmore) is like idiots she has an ice cream truck that we haven’t found yet. Plot hole of the week: Nobody knew she had an ice cream truck? You have all lived in this town for four years!

Everyone splits up to search for the truck. Elsa (Georgina Haig) decides to go to Belle to the library to try to find something about her sister.

I have chemistry with everyone

Our flashbacks for the episode focus on a sadly Ruby-less Belle. None of it was that interesting. Her mother died in an orge attack, which she doesn’t remember of course.

She travels to Arendelle for answers from the rock trolls. She runs into Anna (Elizabeth Lail), also headed to the trolls. She then lets Anna fall off a cliff to what would have certainly been her death but magic, I guess. And she witnesses her get taken by the Snow Queen.

And her snow cleavage

She also makes a deal with her father that he will trade her to Rumple to save the kingdom from the orges. Glad, Belle was taking care of herself then, because she sure as hell isn’t now.

Earlier in Arendelle, Elsa introduces Anna to the Snow Queen, who’s name is Ingrid. Anna thinks she might be shady from the beginning. She talks with Kristoff (Scott Michael Foster) about it and tells him that she didn’t tell Elsa that they’re parents went their to find a way to “fix” her. She then heads for the rock trolls, runs into Belle, finds out her mother had two sisters, Ingrid and Helga, that disappeared when they were little and then erased from everyone’s memories. Memories being erased?! That is something new in this show! 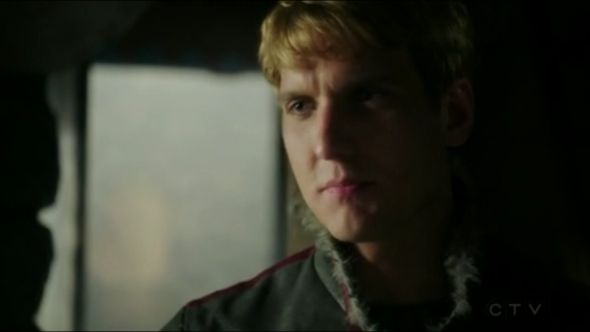 I have contributed nothing to the plot so far

Back in Storybrooke, the Mulan-less Merry Men find the ice cream truck. Regina sasses up a storm by pointing out the craziness of them “storming an evil ice cream truck” and calling Hook (Colin O’Donoghue) Captain Guyliner. She then stands super close to Emma for the rest of this adventure.

Should have left the men behind, Miss Swan

In the freezer, Emma finds that the Snow Queen has files on her since she arrived from the Enchanted Forest. Outside the truck, Robin Hood (Sean Maguire) asks Regina why she is avoiding him. He says it was stupid for him to say that he loved her especially since he had asked her to save his Popsicle wife. Regina apologizes that she can’t find a way to save Marian and that she has tried everything. She tells him the only thing he can do is forget about her and fall in love with his wife again. Lana Parilla was fantastic in this scene, but sadly it was her last of the episode.

Rumple and the Snow Queen had a bad guy meeting somewhere else in the woods. The Snow Queen says Emma hasn’t found anything she hasn’t wanted her to. She also tells him to stay out of her way. Belle then convinces Rumple to go with her to the Snow Queen’s layer to try to figure out what happened to Anna. She thinks she is controlling with the dagger but it is the fake one because her marriage is a lie.

Belle gets to the Snow Queen’s layer, tells Rumple to stay outside. Another version of her appears in the Snow Queen’s mirror. Mirror Belle tells her she isn’t heroic and tells her a bunch of lies, but she does tell her the truth that Rumple gave her a fake dagger. She confronts him about it and he lies again saying the dark magic in the mirror is lying to her. Remember when Belle used to be cool and Rumbelle used to be cute?

This is getting borderline abusive

Back in Arendelle, the Snow Queen has Anna locked in a jail cell. She tells her she was planning to make the two of them and Elsa a prefect family. But, she doesn’t have magic so she isn’t like them and can’t be in the prefect family. Anna says Elsa will never go along with this. But, the Snow Queen plans to tell Elsa that Anna was going to use the Fantasia hat to take Elsa’s powers away because she is afraid of her.

Back in Storybrooke, Elsa tells Emma and Hook that she found out from a book from the library that the Snow Queen is her aunt and she had another one too. Hook makes a joke about everyone in the town being related. Good try, Once Upon A Time. It’s still stupid and about as good of a plot twist as memory loss. Elsa is able to read the scroll that the Snow Queen had in the file of Emma’s childhood art projects. She was looking for Emma because she wanted the savior to replace Anna in her perfect family.

Costume department has been on point lately

Belle then bursts in and tells Elsa what happened to Anna. She also tells everyone that the Snow Queen’s mirror is going to cause everyone to turn on each other. Emma and Elsa think she must be planning to have everyone kill each other so just the three of them can live together as a family.

That already sounds more interesting than Zelena’s curse. I hope it is because it is one of the few interesting things remaining on this show.